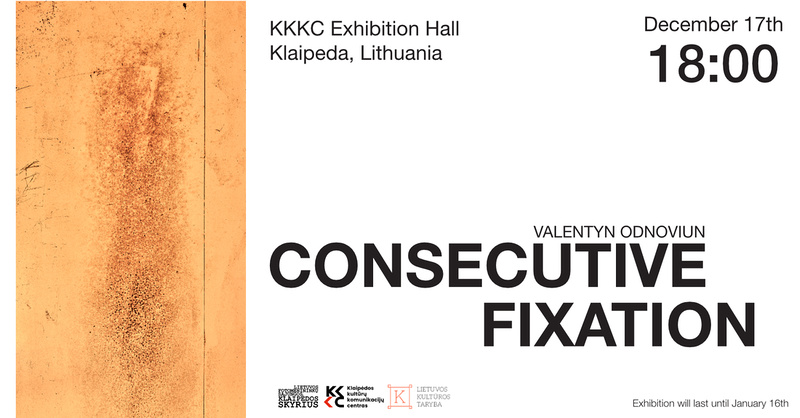 Dear friends! DECEMBER 17TH, AT 18:00, at the Klaipeda Exhibition Hall, will open my exhibition, Consecutive Fixation.

At the exhibition, I will show several of my projects, such as Horizons, The Process, Traces of Memory, Surveillance, Architecture of Evidence, and several other series that were not exhibited previously. Also, it will include both books published during the last two years.

I am still preparing for the exhibition, printing catalogues, and working on different ways of presentation.

The exhibition will last until January 16th

Here, I would like to share the front page of the folding catalogue for the exhibition, which includes images from different series and the text written by Katažyna Jankovska. I hope you will enjoy it!

Inextricably linked to an unseen history, the photographs of Valentyn Odnoviun act as a dispersed collection of traces of political violence, retained by places that once enabled them to occur. Objects sustaining their versions of history manifest themselves as a dynamic entity that communicates the grim fate of the oppressed, sometimes more telling than straightforward - yet edited - human narratives. Erased paint on the metal bunks unveiled imprints of detainee bodies and marks on the cracked prison cell walls. Stairs leading to the headquarters’ basements bear witness to the heavy steps of the wardens. Painted over windows, withholding gazes from both outside and inside. All of them are visual clues that operate as references to events planned to be unseen and forgotten. Like light-sensitive photographic paper, buildings and objects’ surfaces function here as sensors accumulate the material inscriptions of political violence that sustain them as claims.

Reading history via these traces carries a certain forensic interest. The revelatory power of details inherent to the practice of investigation and the need to see what is external to the image puts the viewer in the position of the forensic anthropologist. Ever since the 19th century, the accuracy of the mechanical eye paved the way for photography into the field of empirical science; the medium started to be used as a significant means of evidence, moving beyond partial standpoints towards  unquestionable evidence of truth. However, as the captured aftermath of violence remains a provisional stop between what happened and what was yet to happen, the viewer is proposed to invoke the imagination in order to reconstruct the chain of events. Filling the gaps left with a subjective interpretation, the imaginative associative game turns into a process of mental reconstruction of events, resulting in the whole spectrum of possible meanings and new perceptions.

An emerging thread of speculations reflects the linkage between the images of violence and the violence of images. Questioning the ambiguous relationship between photographic realism and politics of representation per se, Odnoviun’s photographs present visual evidence as a reflection of the repressive logic inherent in the technological possibilities of the camera. Seen as a visual representation of the truth, photography becomes the weapon against it in the long turn, obfuscating rather than showing the way things actually are. The promise of photographic truth fades to gradually become an integral tool of control and repressive power hiding under the veil of objectivity.

Violence can have different configurations. It can be coloured by fear and conflict, as one would regularly expect in the context of historically violent settings. Yet this scattered archive of visual clues of covered, hidden or simply overlooked traces of political violence appears unexpectedly beautiful, creating a deceitful atmosphere of misleading assumptions. Captured cracks, holes and lines appear as almost abstract painterly compositions, explaining the peculiar attractiveness of these photographs. The friction between documentary content and abstract form breaks the sign’s connection to the actual referent, turning documentary evidence of violence into an object of aesthetic contemplation.

Odnoviun’s photographs’ ambivalence and the perceptual doubt experience remind us that the complicity with violence comes from passive reception. Photography, as usually reduced to the act of recognition with no room for a broader narrative, here disrupts the automatic interpretation. Fostering the effect of estrangement, as introduced by Shklovsky and expanding borders of our imagination, photographs enable us to engage critically with entrenched practices of violence.

Usually, the trace means that the event is over and can be gazed upon at a remove, in a state of temporary, physical and emotional distance. Yet, these abstract testimonies transcend their indexical relationship with specific events, reminding us about the universal and omnipresent form of structural violence that is not limited to definite geography and time. Images refer to something already belonging to the past but somehow persistent in the present, thus being emblematic of a larger discourse of oppression. The process of defamiliarisation involves a longer perception process, upsetting the balance between aesthetic and moral response, stimulating our critical engagement with the current underlying systems of brutal forces. Pointing to the universality of violence, these photographs exist in an ephemeral place, speaking for all the past, present and future regimes where life and order seem to be at odds.